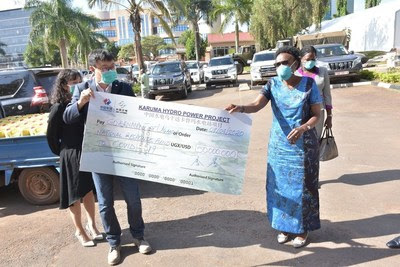 Without POWERCHINA’s strong sense of responsibility to the African people, its projects in Africa would be nonexistent.

POWERCHINA Zambia Branch has been present in this land for more than 20 years, always putting its social responsibility first, such as buying local goods and materials, hiring and training local people to promote social and economic development, as well as initiating charitable activities and providing assistance when Zambia was going through difficult times.

When Africa was not immune to COVID-19, POWERCHINA took all necessary steps to ensure the personal and property safety of local employees, as well as made donations, from the outset. For example, its Uganda Branch donated emergency communications equipment and UGS 50 million in cash (EUR 14,085). This was a vivid and sincere example of the brotherhood between the Chinese and African peoples over the decades, which became even more real in the fight against the epidemic.

POWERCHINA has kept its social responsibility in mind in its projects across Africa. On July 25, 2020, an oil tanker ran aground off the coast of Mauritius, spilling fuel oil that posed a threat to the marine environment. POWERCHINA Mauritius Branch dispatched 14 of its staff to carry out preventive operation and two weeks later, they installed containment boom with more than 1,000 meters long and a safety net covering an area of more than 100 square meters.

In addition, at the end of May 2019, the day before International Children’s Day to be exact, POWERCHINA’s local branch in Mozambique donated balloons, school bags, notebooks and pens to Sunshine Coast Primary School. A month later, the company completed a road to the school. At the beginning of that year, residents of Beira the port city, who were hit by a severe tropical hurricane and continued heavy rainfall, were also assisted by POWERCHINA. At that time, Chinese technicians and emergency vehicles rushed to the affected areas to carry out rescue operations and restored road traffic. Furthermore, POWERCHINA Mozambique Branch also raised USD 30,000 from Chinese enterprises to provide financial support to local affected people.

POWERCHINA has earnestly fulfilled its social responsibility and contributed to the building of China-Africa community with a shared future in its own way.